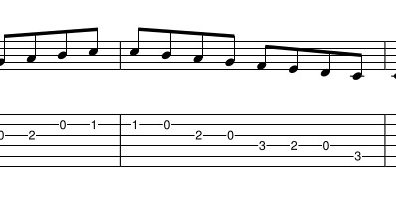 When we first learn our scales and scale positions, they’re often presented in a one position, “boxed in” pattern. Then, once we master this pattern, we learn another pattern, and so on and so on. These box patterns are also referred to as the Caged system. As a beginner student, any system of organizing the information can be useful. There is simply so much to organize and understand it can seem overwhelming. The problem is that for some players, they never leave the cage.

As an example, I’m posting a C major scale played in the open position (using open strings). This is a typical example of what beginning players learn when they start getting into scales. The scale is in one position, starts and stops on C.

The second way step after this one is start organizing the scales into patterns that do not use the open strings. Below is an example of that as well. Organized in a similar fashion, starts and stops on C.

Now if we expand the fretboard a little more, we can get more out of one position, slowly getting out of the box. The next two examples show expansion of the C major scale. We’re still using the scale, we’re just getting way more out of it. The scale continues into the B and E string, stopping at a high A, then descends below middle C, all the way to G, and back.