10 Ways To Be A More Creative Guitar Player 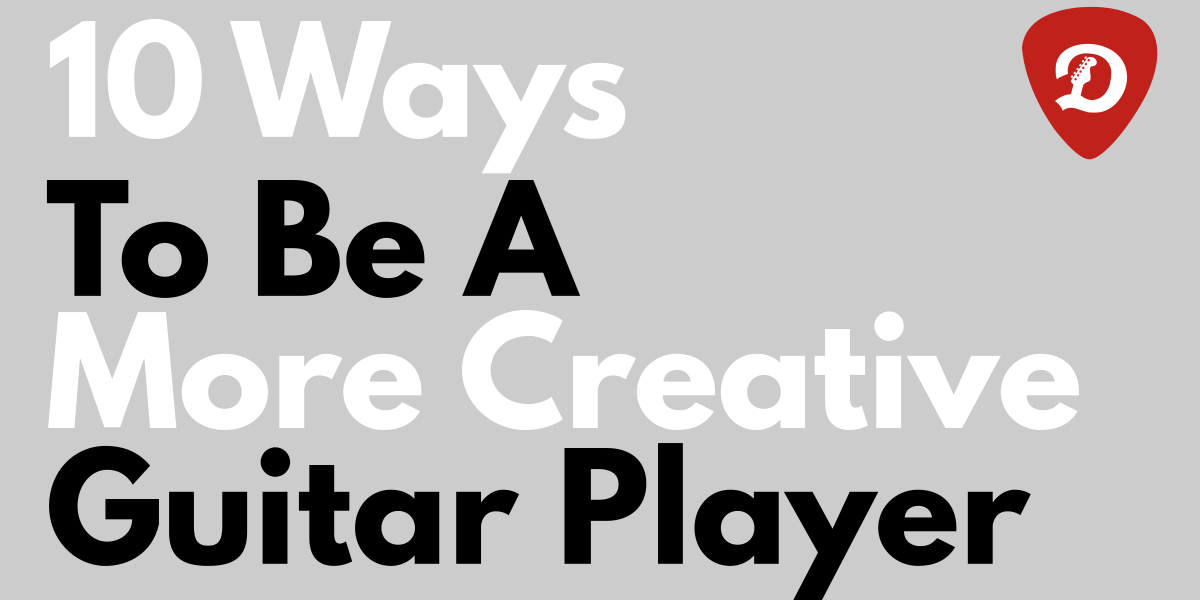 10 Ways To Be A More Creative Guitar Player

Do you always wish you were more creative playing guitar? Do you listen to people who seem to have an endless amount of creative juice they can tap into at any moment? Whether monstrous solos, or lots of songs, It’s like a weird superpower, right? I certainly felt that way for a long time!

I was lucky enough to be around players who were writing and performing new material at a near constant rate. One gig they’d play a set, the next gig they’d do a totally different set of material. I wondered how they were able to be that effective at songwriting and creativity on guitar. So I collected these guidelines that I use and preach to all my students.

Get Off The Stupid Guitar

This one seems so obvious, but is easily the most overlooked. Yes, you can practice guitar 15 hours a day, every day. If you have that in you, do it. But, you need to have a life. Without the ability to relate to other people, be social, and communicate, you’re setting your path for failure.

In order to have the vehicle to actually be creative, you need to have an ability to work with other people. You have to help them, and in turn, they will help you. You need a band, or a manager, or internet forums, or church, or any place people gather to share their ideas.

So, this one is easy. Go out, meet people, have a few drinks, share ideas. That’s it. No guitar practice needed. 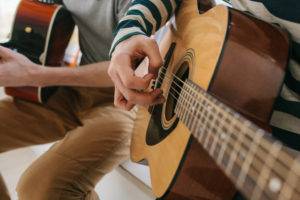 If you are one of these people that spends half their life in the practice room, thinking that if you just did A or B, everyone will like you, you are wrong. No matter who you are, how good you are, how good you look, or how awesome you play, there will always be someone who wants to talk trash and make you feel bad. My advice is always to avoid/ignore all validation and do what you love for yourself. Be Fearless.

Believe me, it’s ok to struggle, it’s fine if you don’t know what to do. If the thing that holds you back is approval of others, throw that idea away, because it will probably never happen anyway. Do what you want for yourself.

Read our article on why beginners struggle, especially the part about no plan. Make a plan, and execute the plan. Hold yourself accountable, and do your best to hit your goals. No one’s perfect, and remember; there will always be someone better than you, and someone worse than you, so be humble!

Make All Distractions Go Away

You need a dedicated space in order to play guitar and practice being creative. What we’re really talking about is growing a muscle, just like at a gym. Only this muscle is in your mind. It’s your ability to put information together in a unique way. This is another one that I feel is very important. You need a creative space.

For some people, an office works. Adults typically have the ‘man cave’ thing that is totally fine. Ideally it is a place that can be isolated, quiet, and comfortable. In my space, I don’t even have a computer hooked up to the internet, as it’s too big a distraction. This room should be dedicated for the sole purpose of practice, being creative, and believe it or not……work.

It takes work to grow a muscle. This is different than technique. Technical players are not also suddenly great songwriters, that is also another craft, that takes equal time. Vice versa, songwriters are not also automatically shredders simply because they know how to write songs. 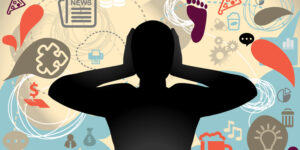 Be Creative on Piano, Drums, or Something Else

This goes with the ‘get off the stupid guitar’ thing. Be creative on something else. Sit at the piano and try to come up with something interesting, then play it on guitar. Try to play a drum beat, then write a guitar part to the beat. Create a chord or sound based on specific moods, or even temperatures.

Write, paint, do woodworking, sculpt, act, work out, try to be mindfully creative and the muscle will grow.

Spend some time in your creative space doing freeform writing, and using that as a springboard for songs, solos, melodic content, or longer more complex ideas.

Free form writing is simply setting a time limit (5 mins or more), then writing non-stop until the time is up. You could write about your day, or imagine something and just write about it, or you could make it a sort of journal. How people use varies depending on the person.

What can you do with this material? Well, the first thing is you can extrapolate it into song form.

Take 3 or 4 sentences that you like and try to make them fit together in a more logical way. Or illogical, it doesn’t matter that much! If you can also make them rhyme, you’re really on to something, and if you can also make all the syllables follow a pattern, you have a strong verse or chorus. Use simple strumming patterns (we have a free Ebook on this)

In a creative guitar sense, we can use this in a similar way. Take a few sentences as before, only this time, try to use the guitar to tell the story of the words you chose. Imagine that in the end, the words won’t even be there, can you convey that information using only the guitar? 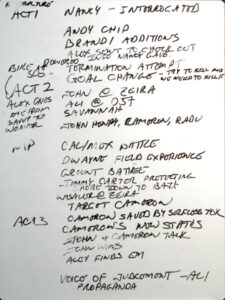 I talk about this one a lot, mostly because I hear the same questions from guitar players about some technique or solo they want to learn, but will likely never use.

If you are intent on learning something, you need to also be intent on using it creatively. I call it the ability to “know what you know”. Both of these aspects need attention and practice. If you only practice learning solos from songs, your solos will sound like all you practiced is solos from songs!

Put some time aside to also practice what you are learning, but in a more real life situation. This can be done by using backing tracks, created by you or someone else, and of course playing in a band.

Playing exercises isn’t real life music, it’s simply execution of a technique, that you plan on having the ability to use later.

Learn How To Improvise

You don’t have to become Charlie Parker, or Yngwie Malmsteen, but you should try being creative in the moment. This means not having every solo completely learned and you’re simply playing that solo well. Play something totally on the fly, and see what happens.

The thing that I see happen most is that students freeze up and don’t know what to do. So we stop, and go over the basics. Here are the ‘safe scales, the safe places’, here are the ‘outsides’.

After knowing that, like good students, they simply play the scales, up and down, maybe with some variations, but mostly, they weren’t creative at all. But, they played all right notes! I talk about this in another article, 6 ways to tell you need lessons.

What this means is that they have to spend time on their own learning how to create space, motif, interest, and unlearn the idea that knowing a scale and playing it is the same as improvising.

Try to learn as much musical language as you think you’ll actually use. I’m not talking about becoming a professor of music, but you should at least have an ability to communicate the things you like, things you want, and how to get other people to do them.

In our DGA group, I have seen miscommunications about what some people think are scales, or chords, or just questions about what this and that are called. Mostly from students who had some aspect half learned or understood, or were off the mark and led astray.

Of course, I’m sure some of use were in band situations where someone is trying to explain a part, and they don’t know what to call it, so you get the verbal, “the part that sounds like duh duh duh duh, then comes duh duh…..duh duh”, that kinda thing. You could just say verse, riff a, verse riff b, the part in C minor, or the pre-chours. See how easy that is?

There are two main reasons this is important. One is that you need to communicate with others, the 2nd is that if you have the language absorbed in your mind, you will use it in your own creative ways, which is totally unpredictable.

Set Limits, Create Inside Them

The idea here, is to define a creative limitation, and stay within that box. Let’s first look at a songwriting example:

You song can only be 3:00. It must contain 2 verses, the 2nd shorter by half, 3 chourses, and a bridge. Go. You can’t stray from this formula. Try to create 30 songs that follow it as close as possible.

One of the things that beginners struggle with is the limitlessness of music. They don’t know where to begin, how to end, or what to do. They have no boxes, they don’t even know there is a box! Beginners need a plan, or a teacher!

There’s a solo in A minor. You can only use A melodic minor, and all scale runs have to be sextuplets. Try to come up with 30 solos.

What you want to do is learn how to work within the confines of something, and use that box to come up with lots of great stuff.

Collaborate With Other People

It’s very important to practice being creative with other people. This could mean playing in a band, working on online projects, or even just getting critical feedback from players or people you respect. Understanding how to communicate your creative vision does not happen overnight, you need to put in the time to get the muscle.

Try playing 2nd or 3rd chair to other players as well. Make sure you practice with a metronome! This time, try not to be the guy who’s the captain of the ship! Play rhythm guitar, or only contribute to someone else’s project! You’d be amazed how little you know, it’s very humbling!

4 Reasons You Avoid The Metronome
December 3, 2020

7 Things You Should Be Doing In The Practice Room
November 17, 2020