Understanding The Greatness of Eric Clapton

Understanding the Greatness of Clapton

Yes, I have met students who have never heard of Eric Clapton! That kinda thing never ceases to amaze me. You wouldn’t believe it, but it’s true! Or, they may know of him in a vague sense, but don’t know his tunes, his solos, or his massive influence on rock guitar.

When I meet someone like this, I start by introducing them to his awesome solo record Slowhand, then The Yardbirds, moving to work with Derrick and Dominos, and then collections of his solo stuff (I’m probably forgetting other stuff as well!)

For the average beginner guitarist, or even most people who don’t play guitar, Layla is arguably the most recognizable song in his catalog, followed up by wonderful tonight. I think it’s because both of these tunes were in big movies, but I could be wrong about that. This is just experience talking, but not necessarily a fact.

In this article, I want to touch upon 5 unique things that make Clapton one of the greatest guitarists of all time.

Clapton frequently uses the blues to tell craft his songs, tell his stories, and play memorable stories. He also manages to twist the old formulas and add something unique to every song.

One of the twists he likes to do is play a riff, or some sort of motive, and the motive disguises the blues progression, making it always sound fresh.

Check out the example here, from the tune Everybody oughta make a change. This tune eventually shows itself to be a blues progression in A, but this riff makes it interesting. 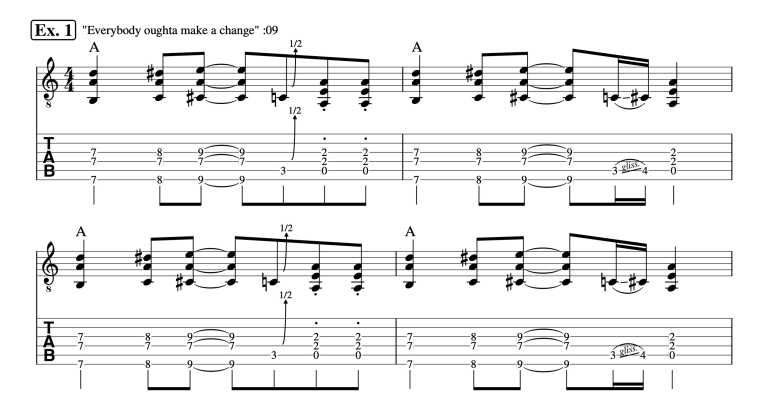 Analyzing the riff, it’s A minor 7th, then a C diminished chord used to pass between the previous chord and A major in first inversion. It really makes the typical blues tune sound cool and fresh! Try using this lick, and the others in this article to Be More Creative on Guitar. It’s actually pretty amazing how instantly recognizable his playing is.

Clapton has a great catalog of tunes, he’s not just a great guitar player. The guitar usually comes second to the songs he crafts.

There are many great ballads in his body of work, but if I had to list 3, they would be Change The World, Running on Faith, and Tears in Heaven. These are my personal favorites, and the ones you should definitely learn playing guitar. Anyone that likes Clapton will want to know if you can play these songs. 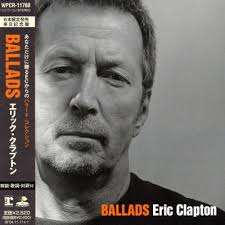 These songs are crafted very well. The guitar plays second fiddle to the structure and the lyrics, however, many of his songs also have tricky or flashy guitar licks buried inside them.

His music is a great study for students Lessons with and interest in songwriting as well as guitar.

Clapton carries with him the blues vocabulary of Buddy Guy, Robert Johnson, B.B. King, and Muddy Waters. His ability of call his influences and mix his own feelings into it with flawless execution is one of the reasons he is a top player!

Check out the example here, where we have a blues turnaround lick that is a must to learn on guitar.

Because the blues are so incredibly important to guitar, this lick is also so often played and copied that it’s almost accepted that you will play it. You might as well learn it here and now!

If you listen to Clapton, you’ll start to hear things he plays that match or mimic other blues masters, either verbatim or with some kind of unique twist, like the one earlier in this article.

As part and parcel of his blues chops, Clapton uses double stops much of the time. Double Stops are simply playing two notes at once, but usually we are talking about bending one or two notes at the same time.

Check out White Room, or really, most of his albums, and you’ll hear tones of double stops. It takes strength to pull off these types of bends and get the intonation correct. But, the best practice is to also listen to a master play them.

In the example above, the double stop is particularly tough, in that both notes are bent a full step. It’s a jarring, out of control type of bend. It works in all types of situations and sounds awesome. Try this next time you’re in the Practice Room.

It’s typical to hear guitar players play chords that are all over the neck and a little disjointed. This is especially true for self taught guitar players, or people who play metal and punk.

When we begin taking lessons, we slowly learn that introducing chord movement can happen by changing to the closest inversion, and following some simple rules in the process. By doing this, the chord movement is much smoother, and sounds more polished.

In songs like Pretty Girl, Clapton uses arpeggios in relative close position to make all the chord movement sound smooth. For ballads, or any song that needs a delicate touch, remember, any big moves on the guitar will be obvious, and that might not be what you want.

When we start Learning Guitar, one of the biggest problems is that we only know one or two ways to play a specific chord. It is always good practice to try to find more ways to play the same thing. This can be accomplished by learning the fretboard, understanding chord theory, and practicing ideas in many keys and positions.

Whether you’re a shredder, a country guy, or really it doesn’t matter where your interest is. If you’re looking for Material to practice, Clapton is your guy. His musical vocabulary contains elements of the blues masters, other influences, and his songs are perfect study on how to craft lyrics and guitar licks.

For more info and transcriptions of Clapton Licks, download our book here!

4 Reasons You Avoid The Metronome
December 3, 2020

7 Things You Should Be Doing In The Practice Room
November 17, 2020