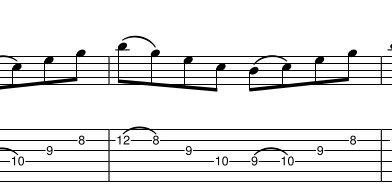 In this article we’re going to talk about using major 7th chords over minor chords, and minor chord progressions. We’ll talk a little about the theory, how to apply it, and provide some examples. There is also a short video of each example https://youtu.be/YVstW7o3v6I take a look and listen, it’ll help give you an idea of what we’re shooting for here.

Normally most guitarists will reach for something in A minor, if the tune is also in the key of A minor. But, just because you’re in this or that key or chord, it does not mean you can’t play notes and scales implying other things. So for these examples we’re using C major 7th over A minor.

Both chords are in the same harmonic family. A minor (A-C-E) and C major 7th (C-E-G-B) both imply the same keys and chord progressions, so they are not too far removed from one another. This means that using C will sound hip, since you’ll be accessing different tones of the “Chord of the moment”. When you’re playing the B in a Cmaj7th arpeggio, you’re actually playing the 9th of A minor. There can be more theoretical analysis to apply to this, but for now, let’s leave it at that.

Example 1 is the base arpeggio we’ll be using. It contains B-C-E-G, and a high B. We’ll be building more impressive licks with this pattern.

Example 3 is similar to example 1, only this time, get more flow going with hammer ons and pull offs.

Example 4 is the same thing, only descending down instead of up. Use Hammer ons and pull offs here also.

Example 5 switches things up a bit. We add an extra note (A) on the top string of the arpeggio. Feel free to add whichever notes you like when experimenting yourself. We’ll be using this version of the arpeggio as well. Technically, this one would be called a C Major 13th arpeggio (if you wanna impress someone).

Look for part 2 for more examples!