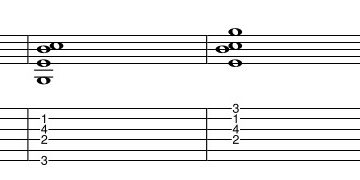 In this article we’re going to look at some Major 7th chord voicings. For these examples, we’re using C major 7th. The spelling for the chord is C-E-G-B. Keep in mind, some of these voicings will not be ones that you’re used to seeing before, and they may prove difficult at first, but with some practice, you’ll have them down in no time. These voicings should be learned in every key, and applied to tunes you know quickly so they can become a part of your vocabulary.

The first example is probably the weirdest voicing. Also, the coolest too! Because of the minor 2nd interval between B and C, this voicing sounds very far from the typical ones. In this example, and all the other ones, the lowest note can be flipped to the top E and it’s still the same chord. Experiment and see which one you prefer.

The second example has the B as the lowest note (or highest if flipped) in the chord. If you know your theory, this is also a very common way of playing the A minor 9 chord. Same notes!

This is most likely the first or possibly 2nd one most guitarists learn, and it serves them well.

And here is the 4th voicing. This one is also very common and very useful.

A quick word on chords and inversions. If you have a C major 7th chord (C-E-G-B), you can interchange the order of the notes and it still is a C major 7th. Even if the lowest note is B, or G, or E. When you play a chord with the root note changed you’re playing the chord in Inversion. Sometimes, in chord charts you may see a symbol like Cmaj7/E. What they’re asking for is a C major in 1st inversion. A C major 7th with E in the bass.