How to Improve Your Left Hand Technique 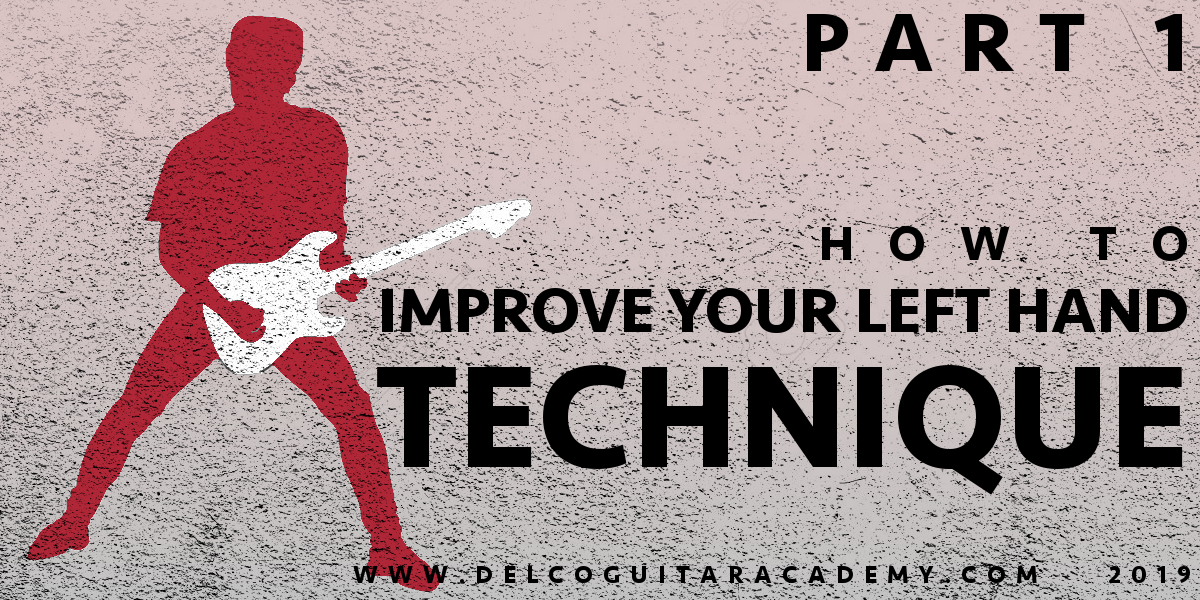 How To Improve Your Left Hand Technique

If you’re interested in learning how to improve your left hand technique on the guitar, the next 5 posts are written for you. Students of all walks and experience often neglect their fretting hand technique, instead focusing on the picking hand. The truth is that both hands have to work perfectly in tandem to achieve accurate, well synched, clean articulation.

What does all that mean in relation to your left hand?

It means that if you experience ‘fretting out’ notes, sloppy or blurred notes, a lack of clarity in each line you play, hammer ons and pull offs that are not metrically accurate, or a lack of dexterity to execute the line you want to play, these exercises will help you!

In the next 6 posts, we will show you how to improve your left hand technique. Using hammer ons and pull offs, and focusing our attention on a single scale and position, we can provide examples that will help strengthen your hand, give you confidence, and inspire you to try new ideas!

All examples shown will be in G major, 3rd position. Some examples will go higher and lower than 3rd position, not by much though, most stay in this position. G major has one sharp, F#, the scale shown is as follows:

The first thing we want to do is be sure we can play the scale as shown, with no mistakes. All the further examples will be based on it, and not only is it important to ‘hear’ the correct notes and notice if you play correctly, but also playing with the correct positions. Students find it helpful to say the note names as they play them. Strive for a clean tone for each note. Not Speed.

We will now subdivide example one and only focus on the first octave of the scale, which is on the first 3 strings, E, A, and D. The first three notes of the G major scale will be hammered on. One pick stroke, three notes. On the A string, we play three notes as well, but only with one pick stroke. Strive to make every note clear and even as if you were picking it.

A Note on Hammer ons:

This is a quick explantation on what they are (if you already know, read anyway) and how they improve your left hand technique. A hammer on is playing multiple ascending notes with a single pick stroke. For example, you can play the note G (3rd fret, E string, and hammer into, without using the pick on consecutive notes. You do this by dropping a free finger dead behind the fret you’re aiming for. Doing this, the player should still play the notation as they would. In other words, hammering on to a note doesn’t cancel out the fact that it’s an 8th note, 16th note, or whatever it is. You can play multiple notes as hammer ones.

A pull off is the same exact thing, but the notes are descending. Instead of dropping a finger down on a fret, you are releasing a finger with a snapping down motion, into a finger that is already down. All the examples in this post will use hammer ons and pull offs to improve our left hand technique.

As in the previous example, we will focus on three strings, this time it will be A, D, and G. We have a similar pattern of hammer ons and pull off as before. B, C, and D are on the the A string, and hammed on with one pick stroke. E, F#, and G are played on the D string, and finishing up with the G string, playing A and hammering the left hand to B. Notice also, that this example does not start on the G, but instead starts on B, which is the 3rd of G major. Once you are comfortable with this one, move on to the next exercise, which is a little tougher.

Let’s experiment with using open strings along with our scale pattern to strengthen our left hand. Starting on our D string, we will play 4 notes on one string, playing the open D, then hammering into 3 more notes. After which we play a 3 note pattern on the G string, before finishing on the note D. Watch out of extraneous noise from ringing strings, by using your picking hand to mute any string you aren’t currently using. The next example will also use an open string to add variety to these exercises.

Starting with open G, our left hand hammers A, B, C, D. 4 notes on a single string, just like example 4. Ideas such as this are more suited to being licks than exercises, they can be used directly as written as vehicles for improvisation. When comfortable, try using these as a blistering solo repeated as fast as possible!

How to Master Sequences for Lead Guitar

As always, thanks for reading!