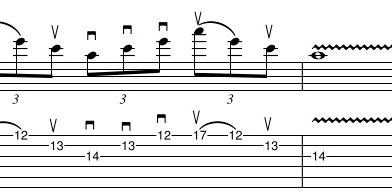 Sweep Picking! This article will discuss basic ways to get more out of basic sweep picking, particularly 3 string arpeggios. All examples shown are based on the A minor arpeggio and are usually the first sweep picking exercise a student learns. Pay careful attention to the pick direction, as notated in each exercise.

Here we have the first example. Usually this is the first example someone learns when studying lead guitar, arpeggios, especially shred based metal guitarists. A straightforward A minor arpeggio, using the notes A, C, and E. The first three strings are all downstrokes, hence the term “sweep”. The highest note, A, is an upstroke pulling off to E, then back down the scale until you return to the same note you started with.

Here we have the same pattern, only the pull off from A to E is the first part of the phrase. In the earlier example that part of the lick didn’t happen until beat 2. What we essentially did was re-arrange the lick. Using the same notes, but displacing exactly where we play them in time. Playing this to a metronome or a backing track will really help how different these two phrases are (although the notes are the same, the order is not)

We have the same idea with this example, although this one is harder. We start halfway through the “sweep” part of the lick, on C, which means the pull off from A to E will end up feeling earlier, as the note E now strikes on a downbeat. As before, playing this with a backing track or metronome will be extremely helpful. It would be tough to mentally internalize this lick without it, as you’re really playing the same lick, but your sense of where the strong beats are changes.

Here we have the final lick for these examples. Once again, the notes presented are rearranged in time. Meaning, certain notes will have more authority over others based on where they fall in the measure. Here, E and C fall on the strongest beats. The pull off that was originally on a strong beat is now on a very weak beat. It will feel quite different doing this than the first example.

As you can see, rearranging simple examples can really add alot to ideas you may already know. We’ll add more examples of this in upcoming articles. Try it out with licks you already know!