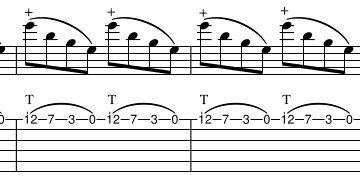 One lick with Variations

In this article we’re going to check out a single tapping exercise. We’ll provide some examples of how to come up with variations on it. With one lick, you could come up with 100’s if not 1000’s of variations. This type of practice is taught in our lead guitar lessons.

We have a tapping lick, presented in E minor. A stream of descending arpeggios, starting with the tapped note (E) with the pick hand. Then pulling off all the other notes down to the open string. This is the example upon which we will start to create some variations that are more interesting. However, there is nothing wrong with this lick by itself. Especially fast, it sounds impressive!

For the first variation, we have chosen to repeat some of the lick early. We’re not actually using any more material than we already know, we’re just playing it in a different context. Beat 4 of every measure shows the lick starting to repeat, then it starts all over again in the next measure. This is one way to make the lick sound more aggressive and unpredictable, especially when you start combining where and when you execute your repeats.

This example is more advanced. Starting with the pull off section of the lick and working back up to the tap, which comes on the upbeat of three and carries over the bar into the next measure where it repeats again. This one will sound and feel weird for awhile, since the accents are not as strong, but don’t let that hold your back from trying it out!

The tried and true variation that has been played and copied many times by players of all background. The taps are repeated rapidly before executing the entire phrase, and in the second measure the tapped note changes to an F, creating a cool neo classical sound.

The “outside the box” version of the tapped lick. Technically, play this over E minor (the key upon these examples are used) and it will be “wrong”. It should sound a little outside. But, execute with confidence and it will sound awesome, and a little out of control. It’s also a great way to start tapping on the lower pitched strings.

These are just a few of the ways you can create interesting variations on a classic lick. Enjoy![/vc_column_text][/vc_column][/vc_row]