Do this to Improve your Song Writing Now

You are here:
Songwriting 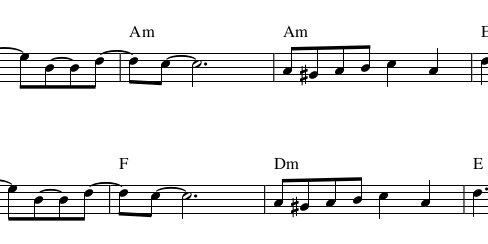 Do This to Improve Your Song Writing Now

You want to write better songs!

You want to write better melodies!

Do you want to write songs, but don’t know where to start off?

Do you struggle to create interesting melodies?

Perhaps you have a pretty good melody, but don’t know what to do to improve it?

Maybe you have a few already, but you don’t know what to do with them?

You try to fit your ideas into a structure, and it just doesn’t seem to work out?

If it takes you a long time to move past this point, this article will help you by presenting a few ways to proceed effectively. These ideas can be used for any kind of melodic idea, be it for guitar, voice, soloing, anything.

How to Create Melodies 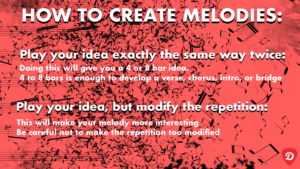 The first 3 examples will show melodic ideas that are repeated exactly the same way. This is a simple, effective way to improve your melody. Be repeating it, you are highlighting the importance of the line. Despite the thought that this seems so easy, this idea is used all the time in the chorus section of pop tunes. Some examples include song writers like Neil Young, Sting, Billy Joel, Metallica, and The Beatles.

If you listen to the links above, you’ll find the chorus of each tune is based on melodic repetition. Try it! It may seem simple (especially if you’re writing your epic hit song!), but simple repetition will help your tune, and your melody, to stick out! Let’s check out some song writing examples!

In the first example, the melodic idea is 4 bars long. The chords outlined are G, G, C, C. In measure 5, the melody is exactly the same, but the words have been changed. Using the same melody and writing different words is one way to use material you have already presented. Students should experiment with their own ideas, and re-using melodic material once, even 3 times.

Example 2 is another idea based on the same concept. Presented in G major, the chords are G, D, Em, C, then repeated again. After the first idea is played (4 bars), to clarify, we repeat the same melodic material, and like the previous example, we change the words.

The last example is in A major. The chords are A, C#m, F#m, and D. The chord progression repeats again in the next 4 bars. The melody is 4 bars long, and the note material is repeated exactly as before, with different words. Try this out!

The next step forward is taking your melodic idea, repeating it, but modifying it in some fashion. The repeated idea can be modified rhythmically, melodically, or both. You can hear examples of this from song writers such as Garth Brooks, The Beatles, Ryan Tedder, and so, so many others!

It is important to remember that just as too much repetition can be overwhelming, too much variation will result in loss of the listener understanding the unity between the ideas. Below are a few examples showing small changes you can make to your own melodies.

This example shows an 8 bar melodic idea, presented in G major. If you break the idea into 4 bars, you can see further the logic of the melody. The first 4 bars show the basis, the next 4 are a repetition of the melody. Can you see any differences? There are! In measure 8, the melody is slightly different than bar 4. This is an example of modified repetition. And, like previous examples, the chords stay the same, and the words are also different on the repeated figure.

This one is a little different. This line could be a melody for voice, a guitar riff, or a violin figure. In A minor, the first 4 measures outline the idea. You repeat the idea, with some variation. Can you find where the variation is? It’s measure 7. In this measure, the melodic line is different from it’s “parent” idea. Also, the chords change as well. In measure 6, we use an F major (instead of A minor), and in measure 7, we use D minor (instead of A minor). What we have done here is modify the chord progression, and also modify the melody. These are two subtle ways to change up your material.